The room was but a void of blackness to the naked eye and a reality far twisted from the rest of the worlds.  He had no way of knowing what it was like outside his own little universe, yet he knew.  He hid from their happiness and the cheerfulness of the sun and the sweet scent of the fresh blossoms, though he did not discourage this that which they may love, because he wasn’t like them.  He still had hope for them, even though it was much to late for him.

He sensed the light midnight rain, that fell, yet wasn’t heard.  As he emerged from his darkness, first his poorly covered feet, and then his dry legs were visible.  Slowly his chest and face exposed themselves to the light of the moon which shown brightly through the clouds with it’s silver-bluish tint through an opening in the swelled, angry rain clouds which seemed to be the tunnel of life, and the moon was the light at the end.  Knowing that most wouldn’t have percieved this the way he had, caused him to smile at his own indifference.  But his odd satisfaction quickly disappeared, fading into a deep sigh of regret and pain.

Now outside, he turned the corner to get to the door, all the while, half praying for no one to be lurking about, attempting to make pleasant conversation with him. 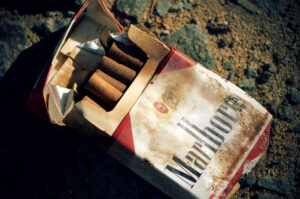 As he was entering the door he thought about whether or not he shut the door to his room of darkness completely, to seal off any other souls from venturing into his own cell of self-inflicted torture.  After dragging himself up the stairs, he tossed his thoughts onto the dining table and staggered into his bedroom.  Once there, he stripped himself to shear nakedness, dug into the pocket of his jeans for his small, maroon, formerly child-proof lighter.  Then he dove into the other pocket to find his stolen pack of Marlboro red class A cigarettes in a flip-top box.  He opened his bedroom window after closing the door and sat in the window sill stark naked for all the world to see.  Smiling in his coy little way, he blocked the wind, which angled the night rain, from the flame of his lighter.  One spark, two sparks and he lit his cigarette, which dangled from his top lip, from the inside the envelope of the open flame.  As a habit he he blew out his first drag without inhaling.  This left what remained, blessed for his shear, dark contention.

A few seconds passed, seeming like hours to him.  He stared blankly at the half-smoked cigarette which he was honing…